In the early 1950s the Women’s Extension Clubs began vocal support for the idea of a county library in Cape Girardeau, Perry, and Scott Counties. At their request, the State Library of Missouri sent a demonstration bookmobile in 1953-1954 to travel over the region and show the possibilities if such libraries were established. The bookmobile visited rural schools and set up deposits in stores, post offices, homes, and existing public libraries. The impact was considerable.

On April 5, 1955, county residents approved a property tax of 1 mill (10 cents) per $100 valuation to fund libraries in Cape Girardeau, Perry and Scott counties. The three county library districts combined to form a regional library, with one administrative and main location, thereby saving tax funds. It also leveraged the gift of 7,000 books from the State Library. The State Library also provided a bookmobile, which began operation in November 1955 using the donated books. The Library system operated a bookmobile until 1974.

The first Central library building in Jackson was located on Highway 61 North, just north of the Hubble Creek Bridge. With the library’s growth came the need for larger facilities. A new building was constructed in the western section of Jackson at Union and Adams streets and opened in February 1958. In 1965, the building was expanded, doubling its size.

Additional service centers were opened in Altenburg, Morley and Oran. The Altenburg branch opened in October 1963 to serve east Perry and northern Cape counties. From 1973 to 1998, Riverside operated a branch in Morley’s Community Building. In 1986, Riverside approved an agreement with the city of Oran to assume operations of the Oran Public Library, now Riverside’s Oran Branch Library.

Beginning in the mid-1990s, Jackson Public Library and Riverside Regional Library worked to merge operations. This met with resistance from Jackson residents and took many years to accomplish. In need of more space to serve its patrons, Riverside Regional Library moved to its present location at 1997 East Jackson Boulevard in 2009. Jackson Public Library closed 2013 and transferred their holdings to Riverside.

Technology has probably been the most significant change that has impacted the library and its patrons. While the library continues to purchase and check out books, formats for audio-visual materials have changed from cassettes and microfilm to CDs and VHS to DVDs and streaming services. Reference services have become more accessible as the library has purchased online databases. The Library has always offered borrowing from other libraries through the Interlibrary Loan Service. In 2018 Riverside joined the Missouri Evergreen consortium, which allows patrons to borrow materials from other member libraries across the state just as easily as they can borrow from one of Riverside’s branches. 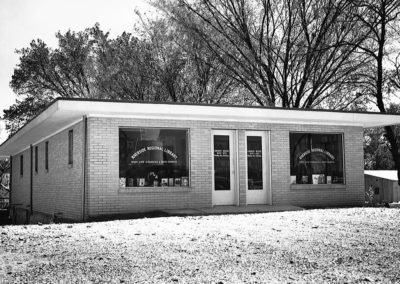 Send message via your Messenger App